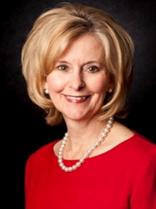 Deborah (Debbie) Jones is a highly motivated and active philanthropist who resides in Cedar Rapids, Iowa and Naples, Florida. Her mother battled Alzheimer's for more than 10 years, and shortly after her diagnosis participated in a National Institutes of Health (NIH) clinical trial which sparked Mrs. Jones' steadfast resolve to advance Alzheimer’s research and treatments. She also was one of her caregivers and is dedicated to offering quality care and support through education. She is married to Clay, who serves as Chairman, President and CEO of Rockwell Collins, a communication and aviation company and they have two adult daughters.

Mrs. Jones supports many charities including United Way, Meals on Wheels, the Cedar Rapids Symphony and the Cedar Rapids Museum of Art. She has just completed her third year as Board President of the Alzheimer’s Association’s East Central Iowa Chapter and is in her eighth year of serving on that board. During her tenure, she co- founded CARES, a Community for Alzheimer’s Research, Education and Support, which serves to raise awareness of the disease, inspire champions and leadership and obtain major gift funding in support of the Association’s mission. It was a three year community challenge in which the financial goal was accomplished in the first year. She is Chair of the Iowa Chapter Network which provides leadership in developing and supporting Federal and State Public Policy initiatives. Mrs. Jones conducts numerous public speaking roles for the Alzheimer’s Association including addressing those present at the Public Policy Forum’s Candlelight Vigil in 2006 and as co-chair of the Alzheimer's Association Advocacy Forum in 2010. She currently serves as Secretary of the Alzheimer’s Association National Board of Directors, chair of its Governance and Nominating Committee and is a member of the Development, Program, Finance, Chapter and Executive committees.